Black and Hispanic students twice as likely to be disciplined with suspension all the way back to elementary school. 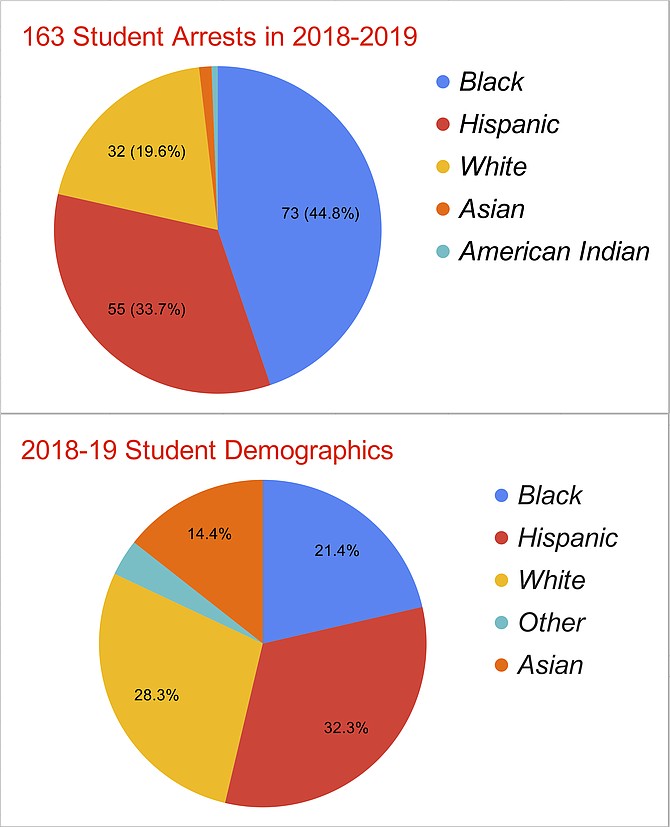 SROs are deployed in public high schools for protection while also providing mentoring, mediation, and educational services to all stakeholders in the school system with the goal of preventing crimes before they occur. Source: www.montgomerycountymd.gov/pol/bureaus/patrol-services.html

Black and Latino students are disproportionately affected by routine school discipline, suspensions, and by arrests in Montgomery County Public Schools. The data on arrests prompted many to ask whether it makes sense to remove SROs from the county’s high schools.

But every high school principal in the county wants to keep their school resource officers, said principals Elizabeth Thomas, of Quince Orchard, and Edward Owusu, of Clarksburg High School.

Pat O’Neill, Board of Education representative for Potomac and Bethesda who has served on the Board for two decades, said every time a school shooting has occurred in the country, “the community has clamored for more police in our schools, thinking that SROs are intended as armed guards. They are not intended as armed guards, they are part of school safety planning,” she said.

Student school board member Nick Asante was the first Board member to voice the possibility that SROs might not be the most effective way to help students, at a Board work session on Monday, Oct. 5, 2020.

“If SROs are there for community building and not necessarily for discipline, are they then the best community member to have at our school building?” he asked. “If so, why SROs?”

“The concerns were raised ever since the very very first SROs in our schools, which was funded by the City of Gaithersburg,” said O’Neill. “A simple fight resulted in students being arrested.”

Joseph Lowery, SRO at Quince Orchard, said he has developed rapport with and an understanding of the school community and overall community in his eight years there, and that he has discretion when it comes to intervention if issues don’t rise to the level of felonies.

“The SROs are specifically trained, they know adolescent development,” said Ed Clarke, MCPS Chief Safety Officer. “They understand the climate and culture of education as opposed to that regular beat officer.”

But the police have always been called to school campuses even before SROs.

Last week, following up from a Board resolution in June, the school system gave data on the school’s SRO program for the last three years as well as school discipline at all grades.

“Everything we’ve been talking about is directly related to arrests in schools, and it all starts way back somewhere much earlier at a much less severe level. And the goal should be no student is ever arrested for something that happens inside a school,” said Dr. Jack Smith, superintendent of Montgomery County Public Schools.

During the 2018-2019 school year, Black students were arrested 73 times and Hispanic students 55 times of the 163 student arrests that school year, compared to 32 White students, and 2 Asian students, according to MCPS data.

“We do have disproportionality when it comes to our students of color and our Hispanic students. That gives us concern and we have to work on that,” said Clarke.

“The goal should be no student is ever arrested for something that happens inside a school.”

A WORKING GROUP, which includes principals, students and advocacy groups, will present a final report to the School Board in January with “possible recommendations to the Board for future action,” said Henry Johnson, MCPS chief of staff.

“We have a lot more work to do between now and January on this,” said Smith. “but we wanted to give you what we do know, what’s been reported to states, and what the flaws and struggles are.”

“SROs were originally intended as part of community-oriented policing,” O’Neill said. “They were funded by a justice department grant and expanded throughout the county. The funding for SROs does not live within the school budget.”

“We’ve heard a good deal, a lot actually in our inbox email asking us to remove SROs from the schools but not a whole lot from anyone who supports keeping them there,” said Board member Jeannette Dixon. She encouraged any member of the public who wants to keep the SROs in place to drop a line. She also asked what the high school principals wanted, and that’s when Owusu said he polled all high school principals who gave him their unanimous support. Thomas nodded her head in agreement.

“Over the last couple of months, many people have corresponded with us and I think it gets to Nick’s question, would the money be better spent for psychologists, social workers, more counselors, etc...,” said O’Neill. “The money is not in our budget. I think that’s an important point. But nevertheless we do need more social workers, more counselors, and psychologists in our buildings, and the community needs those services as well. Perhaps it could avoid some situations where law enforcement is involved.”