Church Damaged By Flood in Potomac 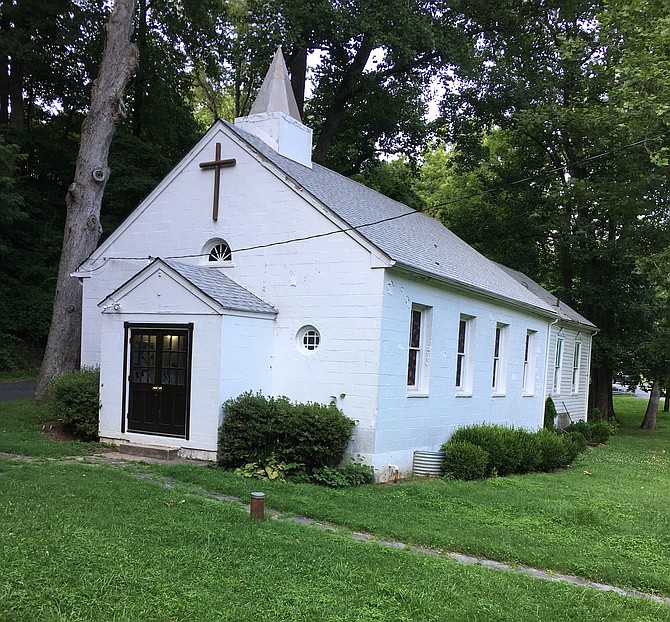 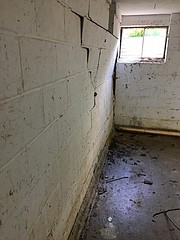 A basement wall bows out as part of damage to Scotland AME Zion Church during a flood in July 2019. The congregation is raising funds to rebuild the historic church. 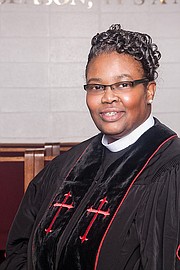 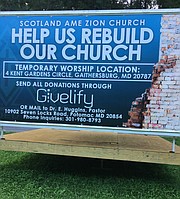 Sign to help raise funds outside the church on Seven Locks Road.

Driving by Scotland AME Zion Church on Seven Locks Road, the building looks pretty much the same as it has for the last 50 years. Inside, however, there is structural damage from a heavy thunderstorm that came through the area last July, causing flooding in the basement and water damage in the sanctuary. More than that, the rush of flood water pushed some of the building off its foundation, making the building unusable.

“This entire [building] is uninhabitable and unsafe,” Presiding Elder Dr. Evalina Huggins said during a recent tour of the church.

The tour included the damp basement with the door hanging by one hinge – another result of the flood – and mold growing on the walls.

It was there that the structural damage was most obvious. A wall between the historic portion of the church and a newer addition is bowed out, plywood closes the basement from the outside where the foundation was damaged and sump pumps run almost continuously, leaving standing water in uneven sections of flooring.

“Everything will be trashed,” Huggins said. “It doesn’t make sense to keep anything that has been exposed to mold.”

Keeping in mind the historic significance of the church, and its present state, Huggins is determined to rebuild the church in a way that brings it into the 21st century. That, to her, means to meet the expectations of a modern congregation with space for families, meetings and socializing in addition to worship.

Scotland AME Zion Church has a thriving community of members, about 85, with 60-75 people attending services each Sunday. Once the coronavirus COVID-19 hit, the community met via ZOOM; now they meet outside on the church grounds.

“The leadership desires the community to see [the church] as more than just a landmark,” she said. “The church is their beacon of hope and strength.”

Huggins is proud of Scotland AME Zion’s history. She shared the following narrative:

In the period just following the Civil War, freed men and women settled in “Snakes Den” along Seven Locks Road. In time, after homes were constructed, the community built a church and school. The wood frame portion of the church standing today was completed in 1924 and is accompanied by a cemetery.

Scotland was a traditional African American kinship community, with family members living in small houses on lots that had been parceled out many times over as they were handed down from generation to generation. By the 1960s, at the height of suburban expansion and redevelopment in Montgomery County, the Scotland community was threatened with redevelopment and urban renewal. Most of the houses did not have access to public water and sewer and did not meet the county’s septic standards for new construction. The County would also only grant building permits if the existing structures were brought into full compliance with County Code.

Discriminatory and racist banking and lending standards at the time meant that Scotland’s residents did not have access to capital that would have allowed for these upgrades. The County’s and WSSC’s policies for building and sewer standards were likewise racially discriminatory, and there was no recourse for this community under intense pressure to sell their land to developers. By 1965, at least 23 homes had been condemned by the County.

The residents organized and fought back. In the late 1960s they formed Save our Scotland (SOS), which later became the Scotland Development Corporation (SDC). Mrs. Geneva Mason, a community leader, Scotland Matriarch, and Vice Chairman of the Scotland Citizens Association notes astutely by 1965 that, “It looks to us as if the county is trying to force us out.”

The Scotland African Methodist Episcopal Zion Church (AME Zion Church), at the time led by the Reverend Frank Randell, was the place of community meetings as citizens organized to save their community. The Reverend was quoted at the time as expressing the feelings of the community when he said, “the people here just want the freedom to build houses on their own property where they’ve been for generations.” The Maryland-National Capital Park and Planning Commission’s land acquisition stance at the time also put considerable pressure on the Scotland residents to sell their land. MNCPPC was actively acquiring land for Cabin John Regional Park.

Under the auspices of SOS, and with the assistance of the Council of Churches of greater Washington, residents of Scotland and their supporters advocated tirelessly to save their community. Residents mobilized and presented a petition to MNCPPC asking them to stop offering to buy out Scotland for parkland. Mrs. Mason spoke out to the Planning Commission, stating, “Don’t take what is ours. You need people like us in the county as much as you need some of your white rich people.” As a result, the Planning Board temporarily suspended its land acquisition for the park. The non-profit SDC applied for HUD housing grants and were instrumental in saving Scotland and promoting many firsts for affordable housing policies nationwide

It took more than 15 years, many rounds of grant funding, land swaps, petitions, and creative leveraging of financing and the creation of new laws to make any noticeable change. But, by 1971, a newly designed and constructed Scotland townhouse community emerged for the ownership and fulfillment of the residents. A new multi-purpose center was also constructed by 1975.

The Scotland African Methodist Episcopal Zion Church is the only historic building to survive in the Scotland community. It is a site of struggle, triumph, and resiliency that deserves to be celebrated and supported by inclusion in the Heritage Area and supported by the Maryland Historical Trust and more importantly the Commission on African American History and Culture (MCAAHC).

Scotland has much to teach us all about environmental justice, the pernicious effects of institutional racism in land use acquisition and municipal policy, and about the perseverance of this faith community that has persisted for over 150 years.

“Life isn’t an equal playing field,” Huggins said. “People are still here because of their resilience. I’ll do anything, within reason, to help them stay. My desire is to make this church a location for the community to come.”

Besides the building itself, Huggins pointed out problems with the site. It just does not drain, she said. Located just off, or just below, Seven Locks Road, water drains off the road and gets caught in a drainage ditch that holds water rather than allowing it to move to a nearby culvert pipe. On the other side of the church there is a high hill allowing storm water to run off, again without proper drainage once it reaches the church property.

Huggins said the community has been phenomenal with offers to help and financial contributions. She has applied for grants to help with the rebuilding fund and was awarded $100,000 in early June, one fourth of the current goal of $400,000 to start planning for her vision for the future of the space.

The Church Go fund me page is https://www.gofundme.com/f/scotlandamez