Who Will Occupy Seneca Store in Poolesville?
Votes

Who Will Occupy Seneca Store in Poolesville? 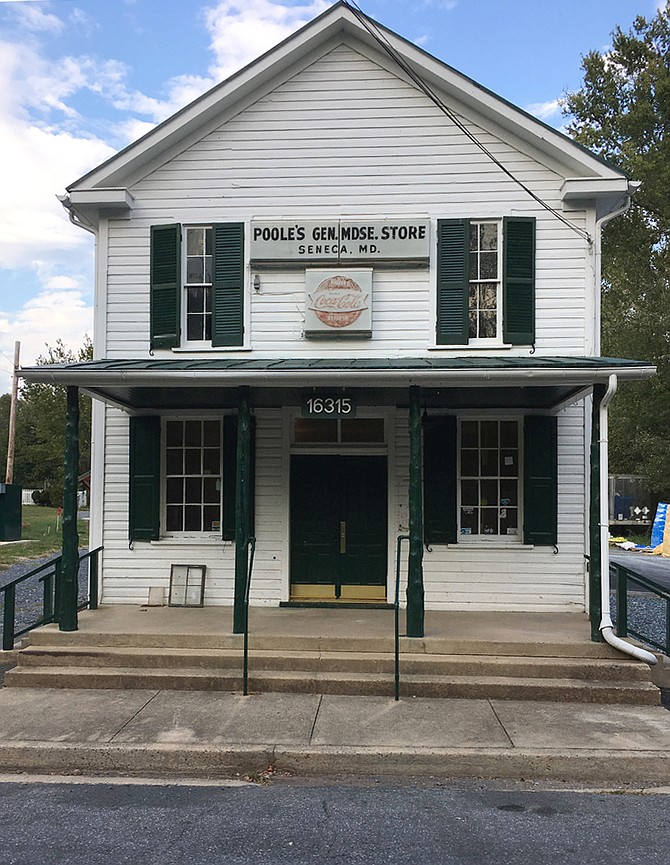 Seneca Store, locally known as Poole’s Store, has been rehabilitated and brought up to code by Montgomery Parks for use as “a working store and a heritage tourism destination.” Photo by Peggy McEwan 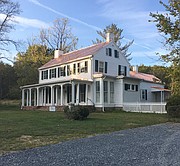 The Darby House behind Seneca Store is also planned for rehabilitation and future lease. The roofing has already been replaced.

(Click on "Download .JPG" to see large photo.) Historical marker placed on the Seneca Store property to share the many uses of the property, going back to the Civil War.

(Click on "Download .JPG" to see large photo.) Historical marker placed on the Seneca Store property to share the many uses of the property, going back to the Civil War.

Jo Ann Poole Clements grew up in the Upton Darby House on Old River Road in Poolesville. Her parents, Billie and Raymond Poole, operated Poole’s Store on the property, selling feed, grain and farming supplies to the local agricultural community and “general store” items to the community.

She also helped in the store her family ran.

She now works for Farm and Home Services that operates out of the warehouse on the same property -part of Seneca Landing Special Park – and would like the business to stay there. Farm and Home, she said, has submitted a bid to use the now renovated store, officially called Seneca Store.

“Hopefully, we will get the lease and run it as the original country store. Hopefully,” she said.

The Seneca Store, which most locals still call Poole’s Store, is on Old River Road in Poolesville. The Montgomery County Department of Parks has rehabilitated the building and landscape perimeter so the building can be leased to a commercial tenant, according to a press release from Scott Whipple at Montgomery Parks.

When taking on the Seneca Store property, the Department of Park’s project goals were to create a working store and a heritage tourism destination.

“[The store] is located in a County heritage area,” Whipple said. “It is a designated historic site.”

Now the building has “all new mechanical, electrical and plumbing systems, and a one-story 300-square-foot rear addition, to accommodate a staff-only restroom and food preparation area. The basement and attic were structurally reinforced but by code cannot be occupied,” according to county parks department. “The project also includes installation of a septic system, water treatment equipment, perimeter sidewalks and six (6) parking spaces behind the store,” according to Whipple.

“It looks nice in there,” Clements said. “They redid the floors except for one portion so you can see the [original] floors. They redid the walls and the shelves. They restored the upstairs and it has central heat and air conditioning.”

Seneca Store was built in 1901 by Upton Darby, who purchased the property. The last proprietors, according to Parks, the Poole family, “provided a convenient supply of feed and specialized goods and services to local equestrian, hunting, and farming communities in the Poolesville area and throughout the Agricultural Reserve for more than 40 years.

“Darby operated a mill there [before the store],” Whipple said. “There were several mills up and down the creek. Through this project we discovered the remains of a mill, we think where the store is. The state required archeology when disturbing the store; it turns out the store floor is on part of the mill floor.”

There are now interpretive markers in front of the store and across the driveway towards the creek with historical information about the store, house and mill.

The store is currently closed to the public. Requests for proposal for leasing it were due Sept. 30.

The building is within the Seneca Landing Special Park, just over 20 acres plus on Old River Road, Poolesville, bordering Seneca Creek. It includes the Darby House, Seneca Store and a warehouse, which is being used.

Montgomery Parks is also working on the house renovation.

The house was built in 1855, Whipple said. So far, the roof has been replaced and, Whipple said, there has been, “a really extensive project to stabilize it.”

When that project is complete the house also will be leased.

Clements has found memories of the house.

“I’ve been in the house; it’s an empty shell,” she said. “It’s still nice in there…real tall ceilings and a big wide staircase.”