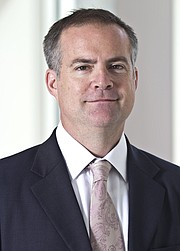 For the past seven years, the Potomac Friends of the Library has sponsored a monthly foreign policy discussion at the library, and the June meeting featured a talk by a former Potomac resident with a real connection to the library.

Daniel Ikenson, director of the Stiefel Center for Trade Policy Studies at the Cato Institute, grew up in Potomac and said some of his earliest research was done at the old Potomac library in the bottom floor of the bank building across Falls Road from the current library.

As a matter of fact, when he was invited to speak to the Great Decisions group, he replied:

“Thanks for the invitation. Having grown up in Potomac in the 1970s and having done some of the research for my earliest social studies projects in the Potomac Library (when it was on the other side of Falls Road), how could I turn down such an opportunity?”

Ikenson said he did his sixth grade Social Studies research paper on the 1976 election at that library. Today, the 1982 Churchill High School graduate is an economist with the Cato Institute, working with world trade issues.

Ikenson was invited to speak on Trade with China, the June topic, by Neil Currie, the Potomac group’s founder and one-man speaker’s bureau.

Monthly topics for the group are based on Great Decisions, a yearly guide to discussion topics presented by the Foreign Policy Association, whose purpose, according to its website, is to inspire the American public to learn more about the world.

The Potomac group follows the topic guidelines published each year, but rather than breaking into small groups for discussion, has a speaker each month.

“Usually you read an article and discuss it,” Edie Wingate, President of Friends of the Library Potomac, said. “But for the [very] first session Neil got a speaker and he has been getting speakers every month.”

That first meeting seven years ago featured Barry Wood, a correspondent with Voice of America. His topic was “The Future of the Euro,” Currie said.

The Potomac Great Decisions group has grown from a dozen people to about 227 now.

Currie said the topics, selected a year or so in advance by the Foreign Policy Association, are always topical.

For instance, Ikenson’s talk on trade with China.

“What could be more topical than that?” he said.

Jerilyn Ray Shelley has been a member of the Potomac group for about a year, joining after another group she was in ended.

“I had my own group for 20 years,” she said. “I organized the group only for women, we needed to learn to articulate. We met for years then everyone sort of went their own way.”

She said she loved Ikenson’s talk and the overall program.

“It helps you feel more understanding of the complexity of the world,” she said. “But it also helps you understand and not be afraid.”

The Great Decisions Discussion Group does not meet in July or August. The next meeting is the first Thursday in September – Sept. 5 at 12:30. The topic will be Cyber Conflict and Geopolitics.