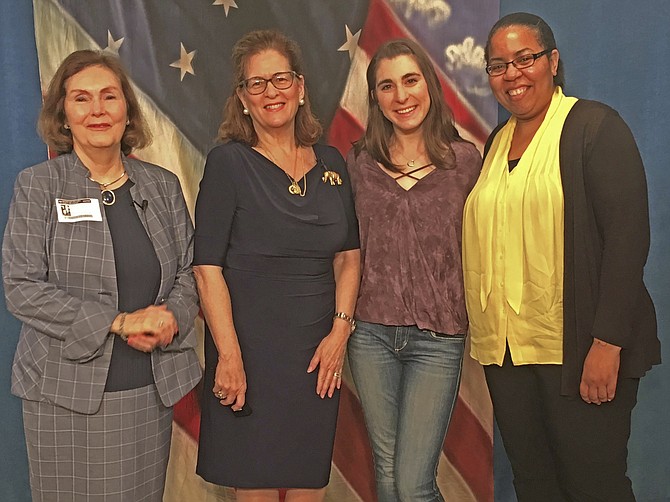 By Rita Beck and Mary Fairbanks

Each year this scholarship is awarded to a local area, college-bound high school student. The winner of the 2019 Award of $1,000, is Thomas S. Wootton High School senior, Abigail Russ. Abigail’s excellent writing and research were evident in her essay which was chosen out of many submitted. Participants were asked to respond in 400 to 600 words to the following prompt: Who do you think had a great impact on the colonists’ successful struggle and fight for freedom from the British in the Revolutionary War and why?

Abigail will be attending the University of Maryland, majoring in Journalism.

We congratulate Abigail on her outstanding winning essay and wish her the best of luck in her educational endeavors at the University of Maryland. Go Terps!

In 1776, the English colonists were split on the question of separation from the mother country. With the publication of Common Sense, Thomas Paine not only inspired an uprising against the English monarchy, but also inspired a new idea of personal independence and freedom that are distinctly American.

Common Sense drove public sentiment toward revolution. Thomas Paine argued that government is a necessary evil in order to maintain security, and that hereditary monarchy is an insult to the governed. In the 1770s, colonists were angry with the Crown and Parliament for newly imposed taxes and restrictions on the colonies without representation. However, he believed that the cause should not be based solely on the argument of taxation, but on the ideas of freedom and independence. He stood against American slavery, both as serfs to the king and Africans in the fields. His ideas are echoed in the preamble of the Declaration of Independence that governments derive their authority by the consent of the governed.

During the difficult opening battles of the Revolutionary War, Thomas Paine continued to inspire the young nation. Even before the American people declared independence, armed conflict had begun. The American patriots were facing the strongest military force in the world. Paine published a series of articles, collectively called the The American Crisis, which rallied public opinion to the side of the patriots. In the December 1776 article Paine wrote,

Let it be told to the future world, that in the depth of winter, when nothing but hope and virtue could survive, that the city and the country, alarmed at one common danger, came forth to meet and to repulse it.

In the same article Paine wrote his most famous quote, “These are the times that try men’s souls.” George Washington ordered his soldiers to read Paine’s article in order to inspire them to victory at Valley Forge.

Thomas Paine was neither a great student nor a great soldier, but he was a great writer. His simple writing style reverberated with the colonists. Paine’s battle cry motivated the country, swayed sentiments against the British crown, and kept up the hopes of a young nation. He had a huge impact on our struggle for freedom and helped shape the freedoms we love today. Paine understood the integral role that journalists have in disseminating truthful information in order to help citizens make informed decisions. He continues to be an important figure, inspiring my love of journalism. Our school newspaper, “The Common Sense,” which I am on the editorial board of, is named after his historically significant pamphlet, and honors his place as a founder of this great country.