Opted for tennis over law.

He was the only part-time teaching professional at BCC and thus, did everything — cleaned the courts, set up games, instructed, built programs for women, men and juniors, managed the finances and encouraged BCC members to “give tennis a try.” Through his dedication, enthusiasm and positive personality, Hatten built BCC Tennis into a successful tennis program with a permanent bubble over two courts, eight additional har-tru courts, a winter tennis bubble, a staff of seven tennis pros and five administrative staff and a new tennis center. 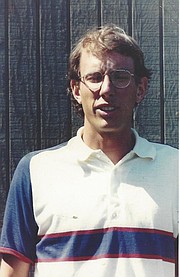 “BCC has been a wonderful place to work,” said Hatten. “The growth in the number of people who enjoy playing tennis has been very rewarding. Eighty percent of the families of our 500 charter golf members play tennis. Thus around 400 families are involved in our tennis program in addition to 100 tennis members. World Team Tennis every June and July brings out 150 members, Cardio Tennis, Live-Ball, tennis teams and junior programs provide interclub competition and skill-building. Tennis is an excellent life-long sport and I love seeing everyone playing and having fun while getting exercise, becoming more fit — and improving their games.”

Hatten became interested in tennis when he was a 9-year-old in Huntington, W.Va. He was recruited as a high school student to attend the Phillips Exeter Academy — a New England boy’s boarding school — and then joined the tennis team at the University of Virginia. He helped UVA win the ACC Championship all four years that he played for them. He was also the West Virginia State Men’s Champion in 1975. After graduation he moved to D.C., planning to become an attorney. However, he loved his summer job at BCC as a teaching pro so much that he gave up his law aspirations to work at Linden Hill Tennis club during the winter and continued to run the tennis program at BCC in the summer.

Hatten knew he would have to somehow turn BCC Tennis into a year-round operation. “There was no tennis in the winter,” he said, “and I asked the club to purchase a bubble. They didn’t want to spend the money, so I financed it myself. The first bubble went up in 1982 and housed two hard courts. Then we converted three courts to har-tru and added the lower five in 1979. By that time, tennis was booming, people were vying for court-time — everyone wanted to learn to play. Every day was delightful – I loved seeing members and their families become addicted to the thrill of tennis.”

“BCC is also exceptionally special to me because I met my wife, Lauren here,” said Hatten. “I gave her a lesson in June, 1977 and we became engaged in August 1977. We have two sons and a daughter who grew up playing tennis at BCC. Both of our sons played college tennis while our daughter played college basketball.”

“I’ve been lucky enough to work in the sport I love and to have the opportunity to make a difference as well as help influence others to become as excited as I am about tennis,” said Hatten. “My 40 years here have just flown by — and I have no plans to retire. I continue to look for opportunities to improve our programs and to deliver the best level of service that I can.”