Bringing ‘A Delicate Balance’ to Potomac 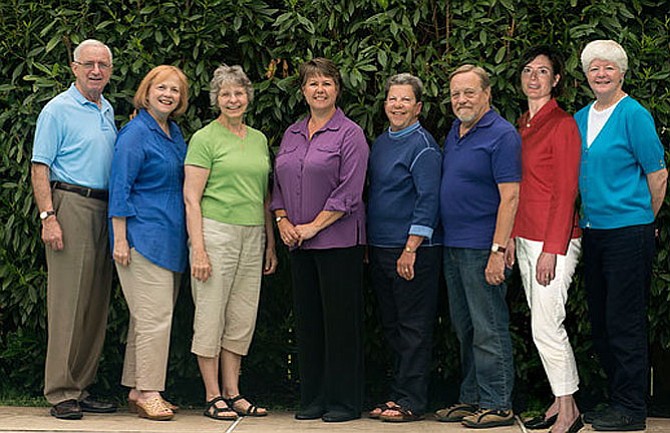 “It was my baby,” Freed said, “something I wanted to do for a number of years, and with the passage of time, I decided to give it a shot. We are a resident theater company of [the Potomac synagogue] Congregation of the Har Shalom. They have with open arms welcomed us in so that we can do high quality professional theatre. They have given us the freedom to choose the plays we want to do and we are most appreciative.”

Peace Mountain’s mission is to produce thought-provoking productions that emphasize the values and ethics of the Jewish religion. Their upcoming November production, “A Delicate Balance,” will be the company’s third annual production. Freed will be this year’s Artistic Director.

“We wanted to start a Montgomery County Jewish Theater and I thought this area could lend a certain support,” Freed said. “We use the values and the ethics of the Jewish tradition in order to choose plays. The plays may not be of Jewish characters, let’s say, but they have within them the values, ethics and message that certainly underscore the Jewish religion.”

“It’s been very well received in the community and the shows we have put on so far have been very well-received by critics and have done in the box office, as well,” Freed said. “The last show, ‘All My Sons,’ by Arthur Miller, was a huge success. We had a record number of people coming to the company and received recognition from [the region’s theatre media outlet] DCMetroTheatreArts.”

Freed said the success of “All My Sons” led her to choose an Edward Albee play for the 2016 production.

“We knew this year we had a high bar to get over,” Freed said. “Going through various plays, I turned to Edward Albee who is one of the most highly decorated living American playwrights. We thought this would be a good follow up to last year — in part because it’s something different. ‘A Delicate Balance’ is a little more avant-garde. It deals with what happens to married couples, or people in general, when they have decided to settle — when the passion is gone and when married couples are just existing together, trying to keep a balance between order and chaos.”

THE MESSAGE of the play, which like most other Albee plays Freed says is hard to “nail down,” is certainly in keeping with a central Jewish value — to participate fully in your own life. It will provoke the audience to think about the monotony of their own lives and when to take charge of the direction of your life instead of falling into a trap of fulfilling a role set by precedent and society.

“What Albee is saying is that people hide this picture of reality and love, but behind this façade is this isolation. He said it was important to take risks in life and evaluate your life and values,” Freed said. “He says art has to be useful, utilitarian and set a very strong message to the audience. Here, there is a message in line with Judaism: Do something. Be out there.”

The actors ultimately chosen for the six roles will rehearse for two months before opening night. While it’s not completely out of the question, Freed said beginner actors are not ideal for the show.

“We are looking for people who know their way around the stage,” she said. “It solves the problem of me teaching while directing. I will often get input from actors on stage, so it’s helpful for experienced actors to bring perspective to the rehearsals in addition to myself.”

PMTC cast and crew do receive a stipend for their hard work, which Freed said for her was a non-negotiable part of starting a theatre company.

“We pay the people who work on the plays, including the actors,” Freed said. “That was extremely important to me when I started thinking about developing a theater company, because actors work for free more times than I care to say. These people are trained actors and they deserve to be given something for that.”

Since it is so difficult to make a living in theatre, rehearsals for “A Delicate Balance” will all be held in the evenings or during the weekend.

“These are not full-time cast and crew,” she said. “Some are students, some have other jobs. It’s very, very difficult to just have a job in theatre. Our rehearsal schedule is built around the needs of the cast.”

In the previous two years, all the Peace Mountain actors have been from D.C., Maryland or Virginia. They are performers who may have the talent for Broadway, but most have chosen not to relocate to New York or Hollywood.

“I definitely could see many of them moving onto Broadway,” Freed said. “They are outstanding, talented actors. Whether or not to do they care to do that, I don’t know. Many people here are just happy to be doing their thing. I don’t think a lot of them feel the need to go to New York if they can find work in the D.C. area.”

From the actors to the people selling refreshments during rehearsals, Freed said between 50 and 60 people are involved with each show. One of them is her husband, Hal Freed, Executive Producer of this year’s production.

“My wife wanted to bring in a little professional experience on the management side and I have many years of experience in Program Management and business,” Hal Freed said of how he first got involved, despite having no previous background in theatre. “She drafted me for the first show and I have been involved now all three years. It’s been an interesting and fun experience working with such talented people.”

Since Peace Mountain Theatre Company is part of a non-profit organization, the company is resourceful. Hal said Laurie has even requested his presence on stage a time or two.

“Laurie’s asked me to consider playing a role when she was in a tight spot, but the most I can do is applaud,” Hal Freed said, adding that he considers his business skills a more valuable contribution.

Still, he insists that becoming part of these productions has been personally rewarding.

“Before, I was always on the side watching and it’s been interesting taking a more active role,” Hal Freed said. “Laurie and I have divided the work easily. She’s handling the artistic side — doing the auditions, getting the cast, designing concept for the set and I make sure we have the right technical people in the back, like getting the right designers for the set.”

He said it’s clear that there is a great demand for theater in the D.C.-Metro area, and that Peace Mountain now is here to supply some of that cultural need.

“We average about 75 to 110 in the audience,” he said. “Last year, we went from three shows to six. It was a risk, but it was a success so we are doing it again. The audience is growing with us and we look forward to continued growth with good quality theatre.”

Audition dates for the six roles are Sunday, Aug. 21 at 6 p.m. and Monday, Aug. 22 at 7 p.m. at Congregation Har Shalom, 11510 Falls Road, Potomac. Freed encourages experienced actors to try out for the play. Peace Mountain will run six shows of “A Delicate Balance” through Nov. 10-20 on Thursdays, Saturdays and Sundays. For information on auditions, the upcoming show or about PMTC, visit www.peacemountaintheatre.com/ or their Facebook page at www.facebook.com/peacemountaintheatre/?fref=ts.