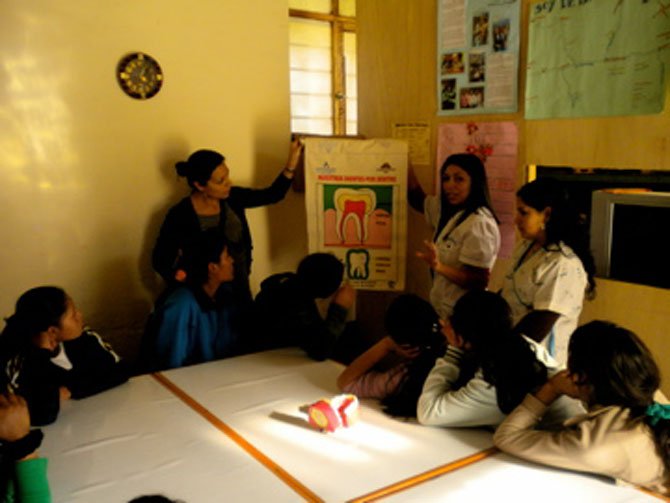 Bianca Crousillat in a classroom in Peru.

Since its birth, and especially over the past year, the program has grown and Crousillat said she has even bigger dreams for the project, which is based out of Ollantaytambo, Peru, and currently operates a dormitory for eight young women from rural communities of the Sacred Valley in Peru.

She added that without the dormitory, these girls would not be attending high school at all due to a variety of economic, geographical and social reasons.

“The dormitory provides a warm and nurturing environment in which the girls live, eat and study during the week as they attend the local secondary school. In addition, the dormitory provides tutorials, educational seminars and after-school classes for the students so as to promote their academic and personal growth,” Crousillat said.

Crousillat said she is very pleased with the success and growth of the program, which now involves professional local teachers to develop curriculum.

“In the last year, one of our greatest achievements was developing an educational program for after-school tutorials and classes,” she said. “This program involves employing professional teachers to provide more intensive tutorials in reading, writing and math for the students of the dormitory. It also entails the implementation of evaluation systems and procedures so that we may track the progress of our students.”

She said that because of this development, the girls’ reading comprehension, writing and math skills have already improved. Their confidence, she said, has also skyrocketed as a result.

“In addition, by providing classes in art and theater, we have seen the girls build confidence as individuals and develop on a more personal and social level,” Crousillat said.

BACK IN 2009, Crousillat worked alongside a small board of volunteers and friends to jumpstart the program.

“The idea behind the SVP began in 2009 and the project was officially incorporated in March of 2010,” she said. “The idea behind the project came from Alex Ball, president of the Sacred Valley Project, who when working in Socma, a remote, rural community of the Sacred Valley, realized that many students, especially girls, had limited access to education and few expectations for their futures. [He] decided that the best solution would be to build a safe dormitory in town where the girls could live and study while attending high school.”

She said she met Ball and joined his efforts while they were both working in a rural village outside Ollantaytambo.

According to Crousillat, the dormitory functions due to the collaborative efforts of a small staff and a small group of volunteers. The project is run by a board of five young professionals and there are also employees in Peru and at the dormitory, including a program director, a dormitory advisory, a cook and local teachers.

Two to six volunteers are usually on site to assist with the day-to-day activities, she added.

“In all, the dormitory is able to run due to the collaborative efforts of a slew of dedicated and inspirational characters,” Crousillat said.

Margie Peters-Fawcett, who has been involved with the Sacred Valley Project with her position at the World Bank group, said she has seen many Non-Governmental Organizations (NGOs) that are intent in helping eradicate poverty in the world, as well as addressing issues such as health, education, biodiversity and environment.

She added that the Sacred Valley Project is particularly impressive to her.

“In terms of gender equality and education, I was impressed with what the Sacred Valley Project is implementing,” Peters-Fawcett said. “I saw what they were trying to do on a shoestring in a remote and rural area, with very little staffing resources. I decided to offer to help more than a year ago when they were beginning the program.”

Crousillat said such volunteers have been priceless to the Sacred Valley Project.

“As a small and growing organization we have few employees and low overhead costs,” she said. “Our volunteers are an integral part of our organization and we understand that without their efforts and contributions a project like ours wouldn't be possible. In the past few years volunteers have collaborated in after-school tutorials, grant-writing, fundraising, website development, administration, research, accounting, photography, marketing and social media development. Every volunteer brings with them new insight and expertise and our project has been able to grow in a positive manner as a result of their tireless efforts.”

WHILE THE SACRED VALLEY Project’s first focus has been on its educational program, Crousillat as a Peruvian-American herself also realizes the importance of keeping the girls’ cultural heritage intact.

Crousillat said that since one the program’s goals is to maintain and promote the girls' cultural heritage; it encourages the girls' parents to do artisan work for sale. This, Fawcett said, is incremental in helping the families become more self-sufficient.

Peters-Fawcett said she is proud to be a part of an organization like the Sacred Valley Project.

“Being a part of a large institution such as the World Bank, and a previous employee of the International Monetary Fund, I admire the young people who have such a passion in helping the developing world, especially when it comes to women and the inequalities they experience in some countries — in this case, being unable to get an education due to their remoteness, while boys can be sent to the towns alone,” she said. “Sacred Valley Project offers a unique concept in establishing a ‘dorm’ that is safe for young girls to stay at while attending township schools to complete their education, which they have a right to. The dorms also have tutoring and mentoring, as well as allowing the girls and their families to earn from working at arts and crafts and selling them, a way of preserving their cultural heritage.”

For more information on the Sacred Valley Project visit

Crousillat lives in Peru where she says she continues to work with the young women of the dormitory at the ground level, assisting with tutorials while managing the day-to-day objectives of the dormitory.

“I am enthusiastic about the future growth of the program and hope to provide educational solutions for 18 more Andean girls by 2014,” Crousillat said. “With greater public help, the program will be able to benefit a greater number of students who will return one day to their communities as empowered indigenous leaders; some may start their own business, teach classes of their own, or even go to college.”