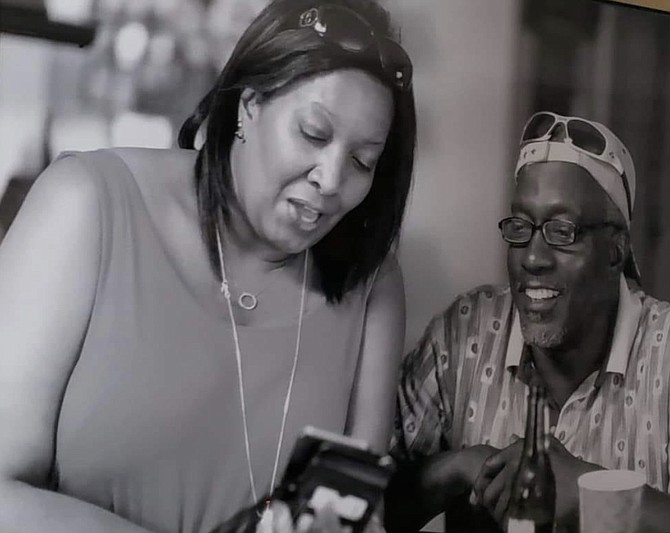 Dawson Colman’s daughter Alyssa teaches him how to use his phone to keep track of his daily water intake. Photo courtesy Alyssa Williams

On a recent sunny and sweltering day,  Dawson Colman parked his car and began to walk the three blocks to a restaurant in Old Town where he was meeting his daughter for lunch. By the time he reached the middle of the second block, the 82-year old had begun to feel nauseous and dizzy.  He had to stop and text his daughter Alyssa Williams.

"I knew something was wrong, but I couldn't figure out why I suddenly started to feel sick. I never get sick,” he said. “It felt like it came out of the blue.”

“When he described what he was feeling, I knew right away that it was due to the heat,” said Williams, who is a nurse practitioner in Vienna.

When temperatures soar, elderly people are more likely to fall victim to heat related illnesses than any other age group, according to the National Institute on Aging.

“Physically, the body of an older adult does not adjust as well as young people to sudden changes in temperature,” said Lucy H. Caldwell,

Fairfax County Health Department. “Older adults are more likely to have a chronic medical condition that changes normal body responses to heat and are also more likely to take prescription medicines that affect the body’s ability to control its temperature or sweat.”

Nausea, dizziness and muscle cramps are among the symptoms of heat stroke, heat exhaustion and similar ailments, said Kurt Larrick,

“Heat stroke is a life-threatening form of hyperthermia [that] occurs when the body is overwhelmed by heat and unable to control its temperature,” Larrick said. “Emergency medical attention is critical for a person with heat stroke symptoms, especially an older adult.”

When it comes to recognizing and working to prevent heat-related illnesses, Colman’s case serves as a cautionary tale. “No matter how healthy, energetic or self-sufficient you feel, don’t underestimate the power of extremely high temperatures. You can go from feeling fine to feeling faint in minutes,” said Williams.

One way to beat the heat is to stay out of it.

“On hot and humid days, especially when an air pollution alert is in effect, older adults, particularly those with chronic medical conditions, should stay indoors in cooler places,” said Larrick. “If at all possible, people without air conditioners or fans should go to places that do have air conditioning, such as senior centers, shopping malls, movie theaters and libraries.”

Stay connected to others or use a buddy system. “Check on neighbors, especially older adults,” said Caldwell.