Montrose Parkway has been renamed.

In response to a request by many African American leaders and historic preservationists, the Montgomery County Planning Board approved a resolution to rename Montrose Parkway in North Bethesda in honor of Reverend Josiah Henson.

In a letter sent to Gwen Wright, planning director at the Montgomery County Planning Department, Councilmember Riemer detailed the historical reasoning for this formal request, which was supported by community leaders whom he has worked closely with over the years to highlight the legacy of Rev. Henson, including Catherine Leggett, 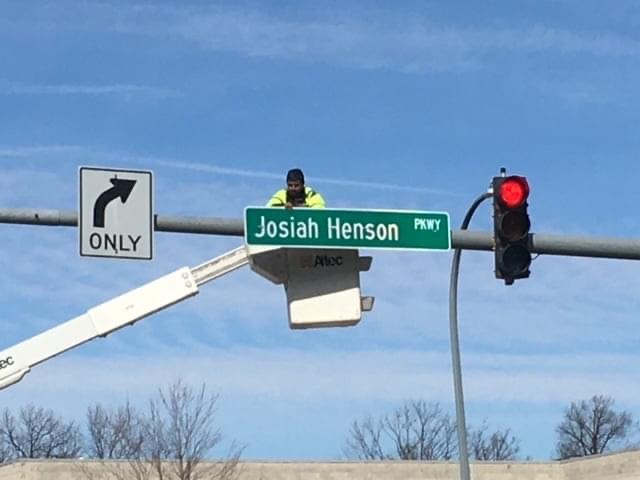 chair of the Museum Advisory Board, and Warren Fleming, an advocate who has worked to bring more County-wide recognition of Rev. Henson’s life and legacy.

“It is important that we provide Reverend Josiah Henson with the public recognition he justifiably deserves, and this new street name is a great step forward,” said Councilmember Riemer, chair of the County Council’s Planning, Housing, and Economic Development Committee. “It will give our residents and children a symbol of the fight for freedom that Henson embodies while reminding our community of our unique history and the role of African American leaders since our founding. I am honored to help make Josiah Henson Parkway a reality in partnership with community leaders and our County government.”

The parkway stretches about two miles and runs through the northern part of the property once known as Riley Farm, a plantation where Josiah Henson was enslaved before his self-emancipation. Henson escaped to Canada with members of his family in 1830. Upon arriving in Canada, Rev. Henson dedicated his life to serving the abolitionist movement at a global level as well as founding a trade school and leading a community called Dawn.

The parkway is located nearby the Josiah Henson Museum and Park, which was funded by the Council and opened in April 2021.

“Today we celebrate another milestone for Josiah Henson,” said Warren Fleming. “The renaming of Josiah Henson Parkway will enable travelers to learn and understand the injustice Josiah Henson encountered and how Montgomery County is continuing to promote equality for its citizens.”

“It is fitting that the county has taken measures to honor [Rev. Henson’s] legacy by building a center to honor him on the land where he was once enslaved,” said Linda M. Plummer, president of the Montgomery County NAACP. “As this county strives to acknowledge the wrongs of our history and remove the remaining vestiges of these past mistakes, it is also fitting that the county pay tribute to those people who have been marginalized in formal accounts of our county’s history.”

As a conductor of the Underground Railroad, Henson helped lead more than 100 people from enslavement in the United States to freedom in Canada, even establishing the Dawn Settlement for fugitive slaves in 1841. Then, in 1849, he published his autobiography, where he recounted the horrors of slavery that he witnessed when living in Montgomery County.

The resolution to rename the Montrose Parkway to Josiah Henson Parkway was supported by local organizations and federal representatives alike.

“Since 1938, the Luxmanor Citizens Association has represented the community that includes 900 households in Luxmanor, Windermere, and the Oaks. Our community was built on the plantation where Reverend Henson was enslaved and is home to the historic log kitchen, Riley-Bolton House, and the Josiah Henson Museum and Park,” said Sheri Steisel Weiss, president of the Luxmanor Citizens Association (LCA).

“Renaming Montrose Parkway will indelibly honor Rev. Henson and his life of perseverance and determination; providing him the public recognition he justifiably deserves while reminding our community of our unique history and the role of African American leaders in Montgomery County since its earliest days,” said U.S. Rep. David Trone (MD-6).

Matthew Logan, executive director of Montgomery History said: “While renaming the road will be entirely symbolic, it will nevertheless be meaningful. Such measures like this contribute to and reinforce more complete and nuanced historical narratives, such as those now offered by Montgomery Parks at the excellent Josiah Henson Museum.”

Eileen McGuckian, president of Montgomery Preservation, Inc. said: “Rev. Henson was an important personage, a Marylander who became renown nationally and internationally as a successful escapee from bondage who not only rescued others but dedicated his life to educating and supporting those who were able to find freedom.”