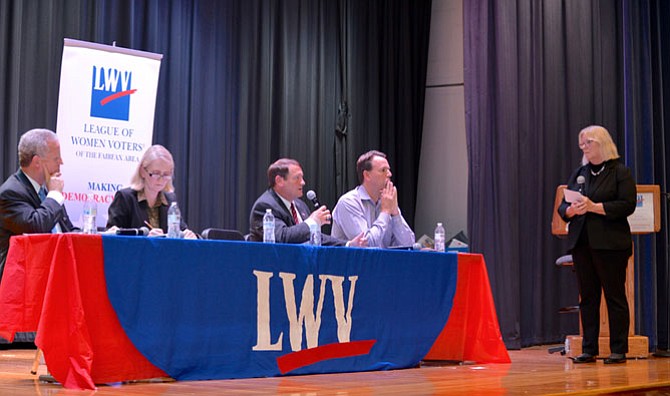 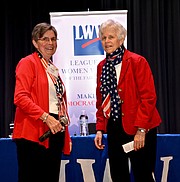 Peggy Knight (left) and Helen Kelly of the League of Women Voters of the Fairfax Area helped the organization sponsor a forum on a proposed Meals Tax referendum that will be decided by county voters on the Nov. 8 ballot.

From left: Fairfax County teachers Elaine Saunders and Precious Crabtree are with School Board member Pat Hynes (Hunter Mill District) after the Meals Tax Forum. All three are in favor of the referendum. “It’s the right thing to do for the kids and the schools,” said Crabtree, who thought that the opposition didn’t offer any practical solutions to replace the proposed tax.

The League of Women Voters of the Fairfax Area sponsored a debate-style panel discussion on the Meals Tax issue which will go before county voters in the Nov. 8 General Election. At question is whether the county’s Board of Supervisors will be granted the authority to implement a 4 percent tax on certain prepared foods and beverages — an enactment that requires approval by voters.

While an ordinance detailing the specifics of the tax will not be written unless the referendum passes, the general framework includes all ready-to-eat prepared food and beverage in restaurants, lunchrooms, cafeterias, coffee shops, cafes, taverns, delis, push carts, hot dog stands and food trucks, as well as ready-to-eat foods — like deli items and salad/hot food bars — at grocery and convenience stores. Among the exemptions would be general groceries and vending machines, as well as schools, hospitals, employee-only cafeterias, and churches and nonprofits serving meals as fundraising activities. If the referendum is passed, the Board of Supervisors has indicated that it may hold public meetings to determine if additional exemptions are needed before the ordinance goes into effect.

IN REQUESTING this new source of revenue, the Board of Supervisors states that they are looking to reduce dependence on real estate taxes, while shoring up gaps in the county’s budget. Of the estimated $99 million that the board projects will be generated by the Meals Tax, 70 percent of the net revenues would be earmarked for the Fairfax County Public Schools and 30 percent to “county services, capital improvements, and property tax relief.”

Plenty of impassioned opinions on both sides of the Sept. 29 debate were displayed by panel members and members of the audience at Luther Jackson Middle School in Falls Church.

Two teams each offered opening statements for and against the proposal and then tag-teamed the questions put to them by moderator Mary Kimm, editor and publisher of the Connection Newspapers.

From a business perspective, Norton warned that passage of the meals tax could hurt area restaurants, cause establishments to hire less, and mean less tips for employees.

Hynes argued that meals taxes were in place in surrounding jurisdictions and that “people still eat out.”

Niedzielski-Eichner also disputed the validity of the study Norton used to support his position, pointing out that it was just one study, conducted by a college student in Kentucky.

Despite major cuts to the central office and services and increased class sizes, the county now spends $1,000 “real dollars” less per child in the school system than in 2008, Hynes said and that “Richmond doesn’t leave us many options. This is one of the few ways we can independently raise revenue.” She is determined to see the monies raised utilized to increase Fairfax County teachers’ salaries, among other school needs. Comparisons show that teachers in Fairfax County earn about $20,000 less per year than those in surrounding school districts.

“This is a referendum on the quality of life in Fairfax County,” added her team partner Niedzielski-Eichner. The rise in the county’s population and the increase in residents needing some form of assistance has put an additional strain on the county’s resources. Niedzielski-Eichner and Hynes made a case that the quality of life and the economic health of the region are tied to the quality of our schools. “People expect excellent schools here,” said Hynes, and a failure to deliver on that expectation will have a serious negative impact.

Herrity disagreed that there are no other options except to enact what he calls a “regressive tax,” that will negatively affect low-income residents, and “working moms and the elderly.” Herrity advocates more fiscal responsibility from the Board of Supervisors. He pointed to “$12 million that went out the door” at the last board meeting on projects that he does not see ever coming to fruition.

Herrity also believes that a revived commercial tax base is a part of the solution. According to Herrity, studies show that the county’s “culture of ‘No’” is contributing to the historically low commercial occupancy rates the area is currently experiencing. Fixing that problem and addressing spending issues is what needs to be done, rather than continuing to “feed the revenue monster,” he said.

As to the lack of funds that come back to the county from Richmond, Herrity said that the county needs to go to the General Assembly with a plan: “We need to do it smart.” The supervisor said that there are ways to request funds for specific programs that will bring more money back to the community, rather than the 25 cents per dollar that is Richmond’s current return to the county.

Hynes reminded the opposition that good schools and high-functioning safety services are required to build the commercial base, as well as the residential base. Hynes used the recent Washington Post article that suggests that Fairfax County, once a “model of wealthy suburban living” is “starting to fray at the edges,” but Herrity countered that he did not believe that services were deteriorating. “We still have one of the best school systems in the country,” he said.

Ever-increasing taxes would precipitate an exodus from the county, in Herrity’s view.

Herrity also suggested seeking more creative ways to fund schools, citing the use of name-endorsement to re-build a high school in Winchester. Hynes didn’t think that was an effective solution, replying “Winchester has the one [high] school. We have 180 schools in Fairfax County.”

Niedzielski-Eichner doesn’t necessarily disagree with all of Herrity’s solutions, but calls them “decades in the making” when the meal tax monies would stay locally and could be used immediately. “We are in deficit, we have real needs now … for schools, firefighters and police equipment.”

Another major portion of Herrity’s solutions to address school funding shortfalls involves possible cuts to the pension plans and social security supplements of new-hire county employees. Seeing the current system as a major spending problem, Herrity doesn’t believe that offering something that doesn’t affect them until age 55 or older is really much of an incentive for new, younger job seekers.

Several of his attacks on spending practices had been applauded by the audience, but this one met with less enthusiasm from the crowd. Cheers greeted Hynes’ reply, “Our employees deserve a dignified retirement after a lifetime of serving the community.”

Kimm continued to referee the count-pointer count between the opposing teams. Before wrapping up, she said, “It seems like much of this debate is based partly on trust.” She asked the panel if they thought the Board of Supervisors would do what they said they would if the referendum is passed.

“It was worded to give it the best chance to pass,” was Herrity’s response. With no guarantees on where money will go, he repeated that the school’s budget would be determined next April.

“The referendum is a clear signal to the board,” responded Hynes. Hynes and other proponents say the board will be held to account to use the money as planned, as an addition to the general budget process and for the purpose of raising teachers’ salaries and other school needs.

THE LEAGUE OF WOMEN VOTERS is a nonpartisan political organization that encourages the participation of citizens in government and works to increase understanding of major public policy issues. As an organization, the LWVFA has taken a position in favor of the Meals Tax, but hosted the Meals Tax Forum without comment or expressing their opinions during the debate in order to allow for unbiased discussion and public education.